Wirtgen America sells and provides services to machines for road construction, mining, and processing of minerals. For this heavy machinery, it is crucial to track and sort all the reported accidents. Accidents are mostly reported to the support team over the telephone. There is an office which accepts support calls and enters these support tickets into the system. Then they are managed based on urgency, brand, dealer, etc.

The main requirement for the new system was flexibility. Wirtgen needs to associate every support accident with a lot of additional information, such as who was the dealer, what was the brand and product line of the machine, etc. This poll of support tickets must be updated and accessible to all the competent employees in real time. Finally, experts for each brand handle the situation described in the ticket and resolve the problem.

Wirtgen America has been looking for a suitable issue tracking software for a while. However none of the available options complied with Wirtgen requirements. “Basically, we bought an issue tracking system and it simply is not working for us. We paid $16,000 for it and it hasn’t been used a single day. So I looked elsewhere and ran across Easy Project” says Ed from IT department. Wirtgen America needed 200+ licenses and on-premise solution.

“Basically, we bought an issue tracking system and it simply is not working for us. We paid $16,000 for it and it hasn’t been used a single day. So I looked elsewhere and ran across Easy Project.”

Why Easy Project solution was chosen over any other one

Easy Project was selected because it combined the flexibility of configuration with an on-premise solution for a reasonable price. The other considered systems were: Issuetrak, Redmine.

The core of implementation was in defining all the fields that are needed to be available for the support ticket. This was provided by Easy Project custom fields in different formats, such as date, list of values, or look up to contacts. Fields were set in a way that based on urgency/priority of a ticket, each ticket was given a certain SLA, which is especially crucial for “machine down” priority level. In addition to that, a special task filter was created to gather all the urgent tasks. When a task fits the filter requirements, an email notification is periodically sent to a set group of users. This ensures, that the most urgent ticket can never be overlooked.

An important part of implementation was a definition of homepages for support operators and a small group of people who create tickets in the application. To save time, specifically for them, we created quick links in the top menu which redirected users to the correct forms with all the necessary fields predefined. The user interface was graphically tailored using Wirtgen logo and pictures of Wirtgen’s machines, which were set as a background image for the login page.

After some time, we identified a small problem that significantly slowed down the application. It was initially configured, that all the support tickets will be shown in one of the homepages. However, when used with real data this meant that information from thousands of tasks had to be loaded. After setting up a limit for task loading, application returned to its usual speed.

In this case, the only users who received our training were administrators. Remaining users received training internally. In fact, the goal of homepages configuration was to present users only with the data that was relevant specifically to them.

The key benefit of using the Easy Project is that Wirtgen is able to have a robust issue tracking solution that is customized to Wirtgen’s requests. All the tickets are updated and reported to the management in the form of charts and graphs. Moreover, the system provides a possibility to use a familiar system not only for support accident tracking but also as a communication tool and project management tool, even though in the first phase, only the support desk system was a priority.

For the management, graphical dashboard with different charts and diagrams was designed. It allows them to get the most out of the data they have in the system. The graphs, for example, give a quick overview of how many accidents there were for each brand of machines that Wirtgen America offers.

The most used Support System tools used by Wirtgen America 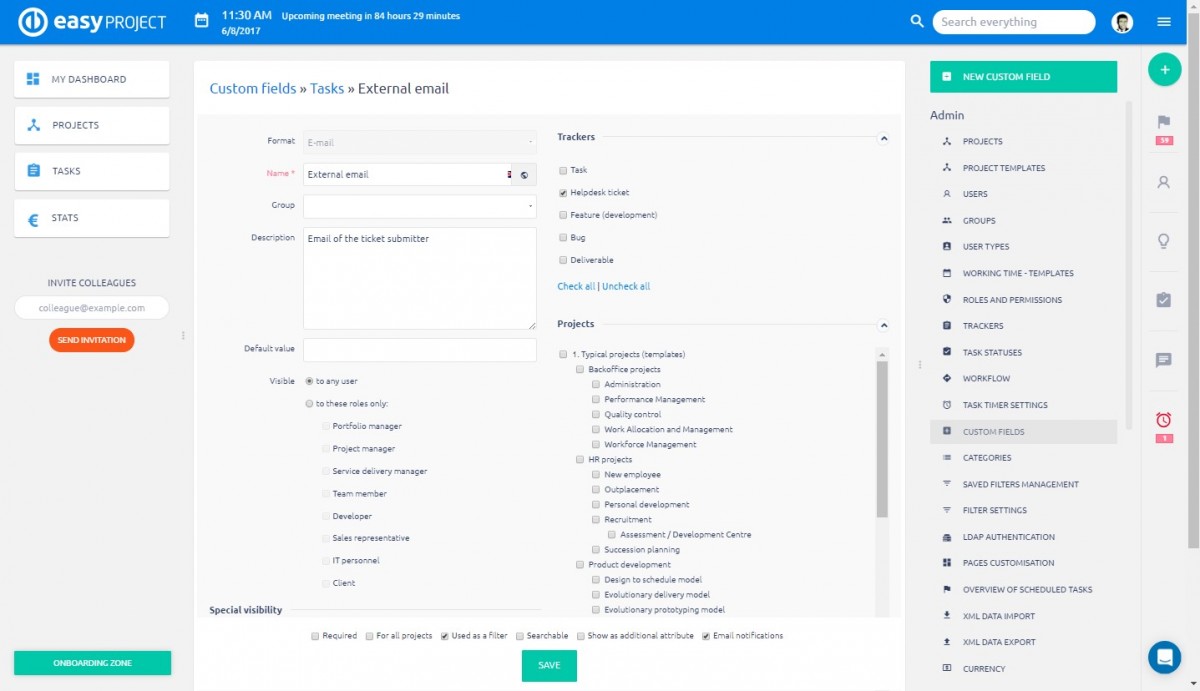 Each support ticket has many additional attributes which specify what happened, what is the urgency, who was the dealer, what is the brand and product line of a supported machine. 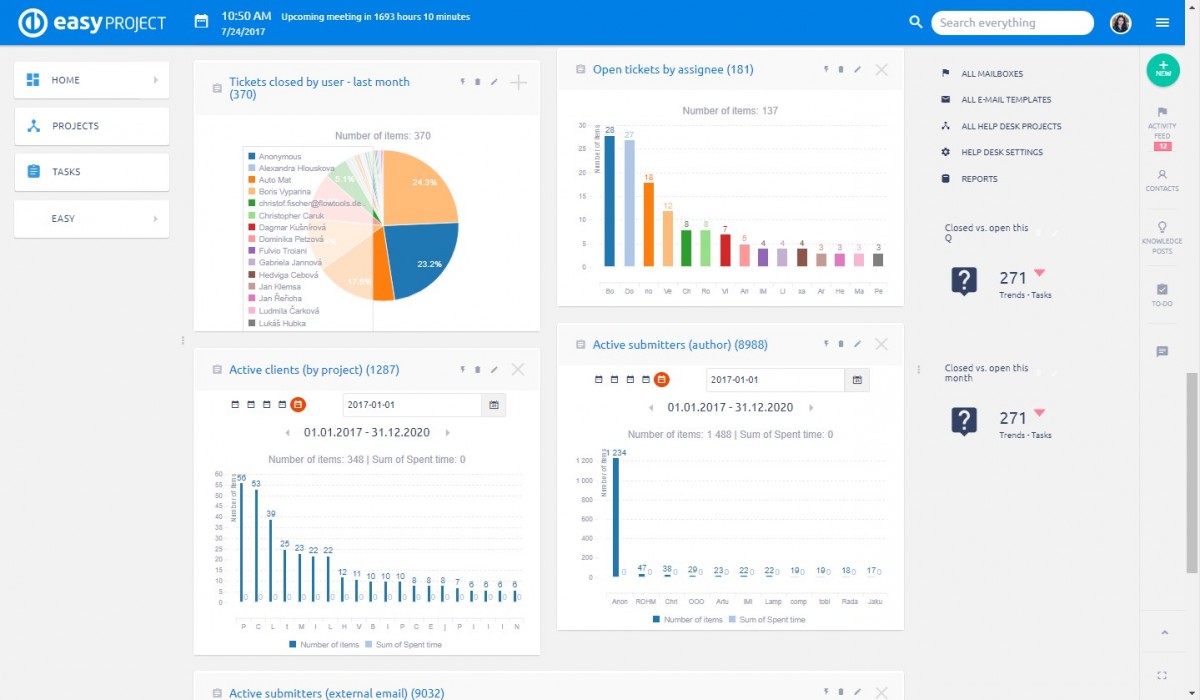 Thanks to easily customizable dashboards, top managers are able to get a quick overview of all the gathered information in a form of graphs & charts, while support desk operators get quick access to the list of unanswered tickets organized by their priority. 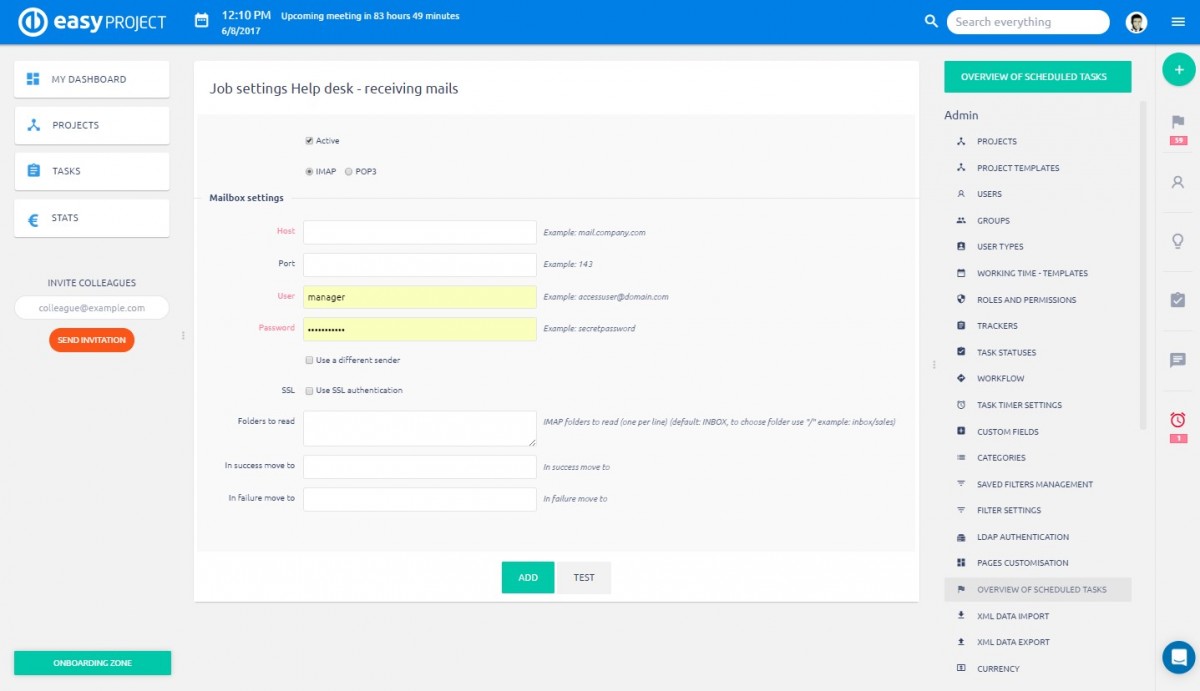 Every support ticket receives a certain SLA based on its urgency/priority, which is visible on both task detail and it's overview. To keep up with the set SLAs, alerts are set up to inform users that a certain task has met the filter requirements. System will continuously send alerts, until task status is changed.